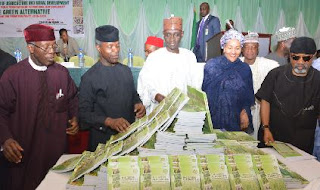 The President Mohammadu Buhari-led Federal Government has launched a new agricultural sector roadmap known as The Green Alternative, for the projected promotion of agriculture for the year 2016 through 2020, reports NaijaAgroNet.
The launch which took place in Abuja, the nation’s capital, NaijaAgronet gathered was declared open by the Vice President, Prof. Yemi Osinbajo on behalf of Mr. President on Monday.
He also said government would deploy 100,000 agriculture extension workers to assist farmers implement the policy, stressing that the move to diversify the economy through the agriculture sector had become necessary due to the huge food importation bill and the need to create jobs for the teeming population of youth in the country.
Osinbajo expressed optimism that the roadmap would address challenges in the sector and reposition it for economic growth and development
“The present administration came into office to meet an economy in a meltdown and we have to take difficult decisions on short, medium term in order to repair the huge damage done, especially by the dependence on oil, the worst not investing in infrastructure or deepening the diversification of our economy, or even building our reserves when oil sold at over a $100 per barrel.
“We knew that we had to set aright and put back the economy on a fast lane, inclusive growth, job creation for our huge population. One of the most critical components of that plan is to position agriculture, the arrowhead of our economic recovery efforts.
“There is no question at all that if we get agriculture right, we will get our economy right. The great clarity, ‘The Green Alternative, sets out strategies to resolve these challenges and particularly impressed that the roadmap does not dismiss the agric policies ‘building on the successes of the agricultural agenda’.
“This particular issue of alignment is crucial. For instance, there is no way we can encourage agriculture than to encourage food production when we allow unbridled importation of the same things we are trying to produce.
“Still on the issue of policy of alignment, as part of our 500,000 teacher corps that we will be engaging 100, 000 of them that will be trained as extension workers for our farms.
“I, hereby, launch the Agriculture Sector Roadmap: The Green Alternative; Agriculture Promotion Policy 2016-2020.”
Further, the Vice President said, the home-grown school feeding programme will have one meal a day for pupils and specifically the food will be from farms in each state. He also assured that the Bank of Agriculture would be recapitalised and repositioned to meet farmers’ financial need by giving them a single digit interest rate and low interest.
Equally speaking earlier, Minister of Agriculture and Rural Development, Chief Audu Ogbeh, said the roadmap for the sector was all encompassing and would salvage the economy from collapse.
“In this policy, you will see us navigating through the agricultural terrain, trucking on virtually every aspect. The emphasis on ‘Green’ is to capture the essence, spirit and orientation of this new policy/strategy document,” Ogbeh said.
Isaac Oyimah/Vanguard/GEE

We will be happy to hear your thoughts

My Cart
Got Questions?